A brief introduction of LTP-cloud and the service it provided

As a cloud-based service, LTP-cloud has the following features:

When the computing resources and the programming language are limited, it’s no doubt tha LTP-Cloud is your better choice to analyze language.

The academic version of LTP has been shared with more than 500 research institutions free of charge, Baidu, Tencent, Huawei, Kingsoft and other companies pay to use the commercial version of LTP. In 2010, LTP was awarded the highest award in Chinese Information Processing - "Weichang Qian Chinese Information Processing Science and Technology Award."

If your company or institute needs a series of high-performance Chinese natural language analysis toolkit to deal with large-scale data, or you want to lanch your study based on some low-level Chinese natural language processing modules, or you want to compare your own experimental results were with the state-of-the-art work, LTP may be your choice. 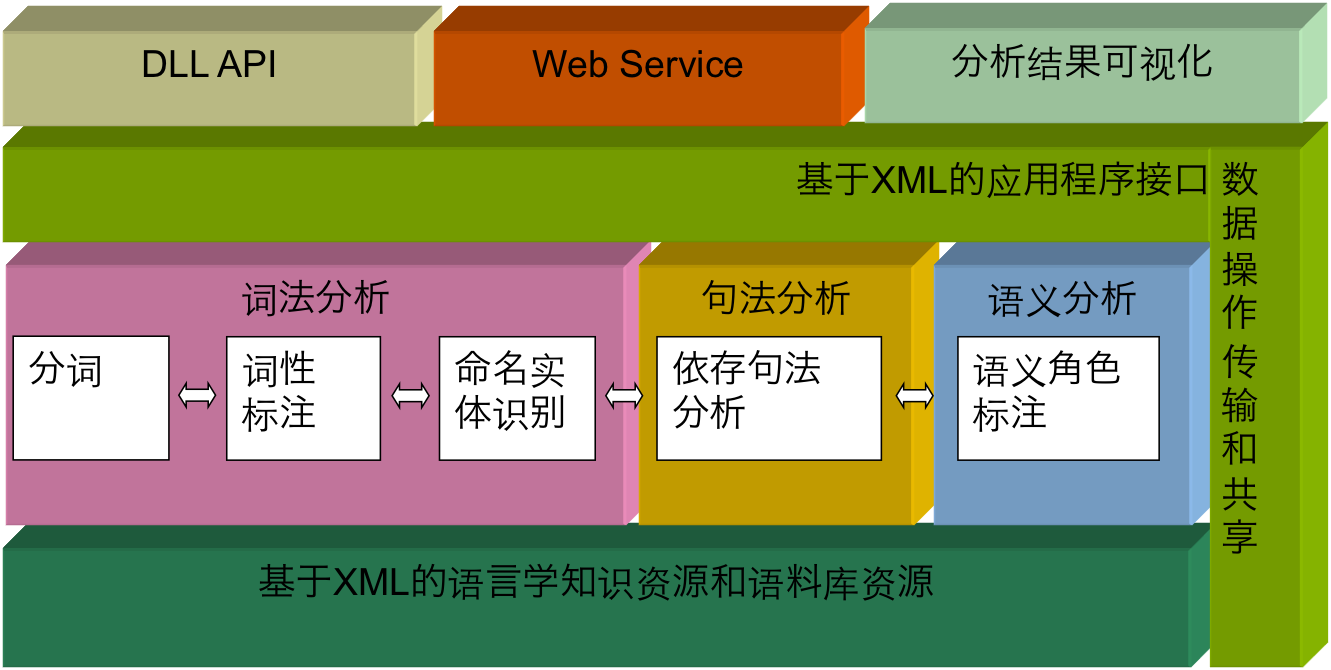 Why we need language analysis

Supposing your company has released a new mobile phone. The release of this new product brought mass reports and user feedback. Facing mess of the data, you may want to know

In the face of massive data in the case, using human to analysis these data is clearly unrealistic. In this scenario, natural language processing comes in stage.

Let the machine replace people to complete these analysis work is what natural language processing does.

What kind of language analysis we need

Chinese word segmentation (CWS) is the task of segmenting Chinese sentence into word sequence. Since word is the basic language unit that carrying sense in Chinese, word segmentation is the initial step of information retrieval, text classification, sentiment analysis and many other Chinese natural language processing tasks.

Chinese word segmentation becomes a tough task because the combination of characters may introduce ambiguities. For example, for the following sentence:

The correct result is Owing to 强调(emphasize) is a common word, system may fail to distinguish it from a Chinese name and give wrong result as follows: This type of errors will lead to the search engine to fail retrieving the documents related with 李克强.

Ambiguity is a major problem in segmentation task. LTP's word segment module is based on machine learning framework that is powerful to solve the ambiguity problem. Meanwhile, owing the dictionary strategies which incorporated in the model, new words information can be easily handled with sufficient materials.

Part-of-speech Tagging (POS) is the task of labeling each word in a sentence with its appropriate part of speech. We decide whether each word is a noun, verb, adjective, or whatever. The following sentence is an example of:

The POS Tag of word as a generalization of the word, in speech recognition, parsing, information extraction tasks such an important role. For example, in the extraction "歌曲(songs)" of the related properties, we have a series of phrases:

If you have POS information of word and replace the word with POS Tag, we can find some of the attributes to describe "歌曲" templates, such as And[pronouns]歌曲is more often not to describe attributes of the template.

The POS sets:The POS module of LTP uses the sets in "863", each of its meaning is listed in following table:

NER is the task to locate and identify the names of person, location, orgnization and other entities in a sequence of words in a sentence. As in the previous example, NER results are:

NER is important for mining entities in text, which can futher improve extracting events or mining information.

Types of named entity is usually determined by the task. LTP provides the most basic of the three entity type names, places, organization name recognition. Users can easily expanded the ner tags into a brand name of an entity type, software, names, etc.

By analyzing the dependency relations between language components, dependency parsing reveals its syntactic structure. Intuitively, DP identifies "subject-verb", "adverbial" and other grammatical structure and analyzes the relationship between different components in a sentence. As the example above, the analysis result is:

From the analysis results, we can see that the head predicate in the sentence is "提出", the subject is "李克强" and proposed the object is "支持上海 ...", "调研... 时" is the time adverbial of "支持", "李克强" modifiers "国务院总理", the object of "支持" is "探索 新机制". With the above syntax analysis, we can more easily see that "提出者" is "李克强" instead of "上海" or "外高桥", even if they are nouns and the distance to "提出" is more close.

The annotation of dependency relations (total of 14) and their meanings are listed below:

SRL is a shallow semantic analysis technology to mark some phrases in a sentence as arguments of a given predicate, such as agent, patient, time and location. SRL can contribute to question answering system, information extraction and machine translation applications. For the above example, the SRL results are:

Given a complete sentence, semantic dependency parsing (SDP) aims at determining all the word pairs related to each other semantically and assigning specific predefined semantic relations, which is a projective tree structure now and will be expanded to directed acyclic graphs. Semantic dependency analysis represents the meaning of sentences by a collection of dependency word pairs and their corresponding relations. This procedure survives from syntactic variation. Here are three sentences:

Their syntactic structures are distinct, while the same meaning is hidden behind these sentences. i.e. eat<he, apple>.

SDP is not influenced by syntactic structures which makes it focus on the real semantics of sentences. Here is an example illustrating the parsing results of DP and SDP respectively.

From the above comparison, we can conclude two points, the first one is syntactic dependencies put emphasis on non-entity words for their roles in partitioning the sentence structures. The second one is that the totally different dependency relations make SDP could represent the detail semantics. SDP can be used to answer the questions raised from the sentences, such as all the Wh-Questions. However, DP could not.

In LTP, the word segmentation problems is modeled as character-based sequence labeling problem. For a given input sentence, the model tags each character with a tag which identifies word boundary.

Meanwhile, in order to improve the performance on the Internet text, especially the micro-blog, the following optimization strategies are incorporated into our word segmentation module:

The performance of word segmentation module on People's Daily test sets is shown below:

The same as word segmentation module, POS Tagging can also be modeled as a sequence of labeling problem that labels each word a POS Tag. The tag set we employ in LTP is the Peking University tag set.

The performance of POS module on People's Daily test sets is shown below:

The same with word segmentation module, the NER task is modeled as a sequence of labeling task based on word. For input sentence word sequence, the module tag each word in the sentence a named entity identification and entity class tag. LTP support recognize the names of persons, organizations, locations.

the performance is shown below:

Graph-based dependency parsing method is first proposed by the McDonald, he detrive it as the problem to find maximum spanning tree in a graph(Maximum Spanning Tree) .

In the LDC data sets, the three different decoding performance is in the following table.

In LTP, we divide SRL into two sub-tasks. Fist is the predicate identification and second is argument identification and classification. For the identification and classification of argument, we treat it as a joint mission, the "non-argument" and the "argument". In SRL system, we introduce the the L1 regular to the maximum entropy model which result in feature dimensions reduce to 1/40 of original one. It greatly improve the memory performance, and enhance the prediction speed. Meanwhile, in order to ensure annotation results meet certain constraints, the system adds post-processing.